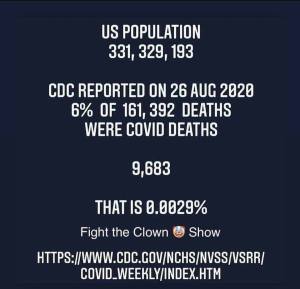 Allow me to propose a hypothetical.

Imagine for a moment that I have a chronic illness like high blood pressure, but that I’ve got it mostly under control. I travel to Africa on a once-in-a-lifetime vacation and have the horrible misfortune of contracting ebola, a disease that kills between 25% and 90% of the people who contract it. There’s a treatment that might work, but because of my high blood pressure, I can’t take it, and I end up dying as my organs turn to mush and I gruesomely bleed out of every orifice.

What was it that ultimately killed me? Was it ebola? Or was it my high blood pressure?

We’ll come back to this question in a moment.

On August 26, the CDC published COVID-19 comorbidity data that showed only a small number of deaths from COVID-19 alone, while a large number of deaths occurred in combination with other chronic medical conditions such as high blood pressure, heart failure, COPD, diabetes, pneumonia, renal failure, obesity, and others.

This should not be a surprise to anyone. After all, we’ve known since April (and maybe since February) that COVID-19 is especially lethal to the elderly, and the older you are, the more likely you are to have one or more chronic illnesses like asthma, heart failure, etc. So essentially, the CDC confirmed that COVID-19 is especially lethal to people with certain types of chronic illnesses.

Put another way, this is like if an oceanographer (a scientist who studies the ocean) pointed out that, not only is the ocean wet, but it’s salty too.

However, a lot of people who believe that COVID-19 is a hoax or a “Plandemic” or a liberal conspiracy to erode freedoms and force tyrannical socialism on the country seem to think that this is a “gotcha!” moment. One of those people was Donald Trump, who tweeted a QAnon account who essentially said that the CDC had lied and been caught lying about the actual COVID-19 death totals in the US. And ever since, some people have been sharing the false interpretation of the CDC’s data all over Twitter and Facebook. They believe that this is the CDC admitting that there have been fewer than 10,000 COVID deaths in the US, not the nearly 183,000 deaths counted by the CDC as of August 31, 2020.

They’re wrong. Not only that, but memes and comments like the ones at right are disinformation.

Now let’s revisit that hypothetical. Did I die of ebola or was it my high blood pressure that killed me? You could certainly say that the combination of both the virus and my blood pressure resulted in my death, but since my blood pressure was under control, I would still be alive if I hadn’t contracted ebola. Furthermore, high blood pressure doesn’t cause either multiple organ failure or widespread hemorrhaging, so clearly the cause of my death is ebola.

The people spreading the CDC disinformation would have you say that it was my high blood pressure that killed me, not the ebola.

Let’s look at some other hypothetical situations.

Let’s say I’m a gay man in 1985, when the AIDS epidemic is ravaging gay men and IV drug users. I contract HIV and it destroys my immune system so thoroughly that I die after I cut myself and get a staph infection that turns septic. Was it the septic shock that killed me, the HIV, or both?

Let’s say I’m driving my car while I’m unknowingly infected with COVID-19. Because COVID-19 messes with people’s immune systems and clotting factors, I suffer a stroke while driving and have an accident, during which I’m killed. Was it the car accident, the stroke, or COVID-19 that ultimately killed me?

People claiming that there are less than 10,000 COVID-19 deaths are spreading disinformation. Correct their disinformation if you can, ignore it if you must, but whatever you do, don’t believe it.